Virus-like particles (VLPs) are non-infectious nanoparticles that assemble from recombinantly expressed viral proteins but lack the viral genome required for replication and infection. Because they are non-infectious VLPs do not require the same level of biosafety containment as competent native viruses but retain the self-assembling and antigen presenting capabilities that can be manipulated for innovative therapeutics uses. It is encouraging that a number of VLP-based vaccines are licensed for human use including Engerix® and Recombivax HB® hepatitis B vaccines as well as Cervarix® and Gardasil® human papillomavirus-like particle-based vaccines for prevention of cervical cancer. Many others are in development to treat current viral threats like ZIKA virus, BK Virus and JC Virus. VLPs may offer the means to bypass the long-standing obstacle to targeted drug delivery that may minimize side effects and enhance efficacy and offer effective treatments against many pathogens[1]. 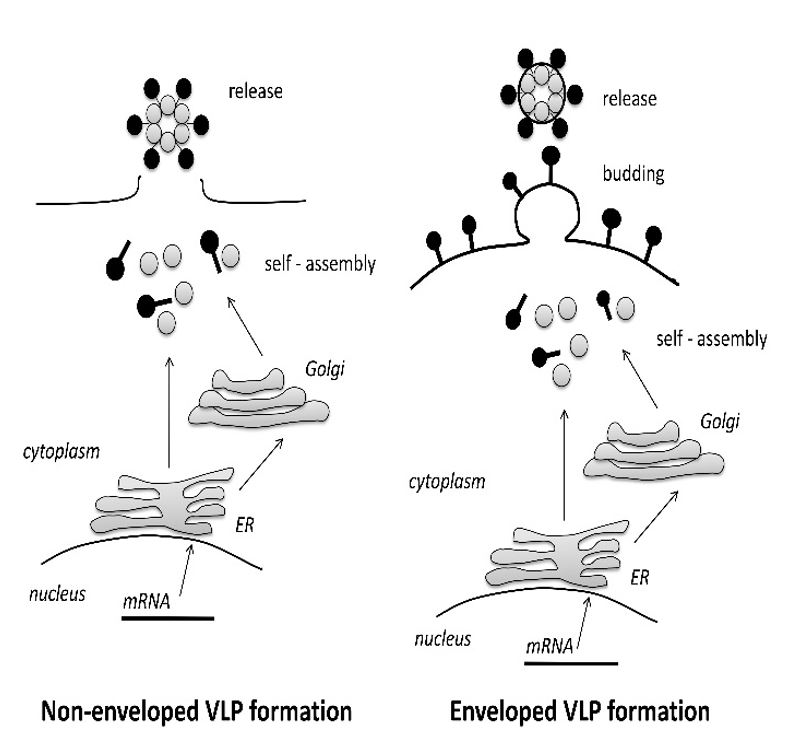 Expression Systems for generation of VLPs

Use of VLPs in vaccine research- Case Use

IBT Inc has extensive experience in expression of the filovirus VLPs composed of a matrix viral protein (VP40). This is sufficient to drive budding of the VLPs and mimics the distinct filamentous structure of the authentic virus. Addition of viral glycoprotein (GP), the major determinant of protection against filovirus infections, to the VLPs enables it to elicit protective immunity. Our VLPs also included the viral nucleoprotein (NP), which localizes in the core beneath VP40 and is hypothesized to provide additional protective T-cell epitopes. We achieve this using a combined mammalian (HEK293T) and insect (SF9) cell-based expression platform. The resulting VLPs have demonstrated protection in nonhuman primates against three different species of ebolaviruses including homologous protection using Ebola virus (EBOV) and Sudan virus (SUDV) VLPs[2], as well as heterologous protection against Tai Forest Virus (TAFV) by EBOV VLP[3]. This is relevant as aerosolized filoviruses are considered to be potential biothreat agents.

Back To Top
×Close search
Search

IBT Bioservices continues to conduct critical work as an essential business under the State of Maryland’s COVID-19 response directive. We have implemented a risk management plan and are continually monitoring the situation to ensure continuation of research according to public health services recommended best-practices for keeping our employees and the community safe.

The IBT Bioservices team will continue to deliver high quality products and services for every project. If you have any questions contact us at Services@IBTBioservices.com