Staphylococcus aureus (SA) is a Gram-positive bacterium that colonizes approximately one third of the human population1.  It causes a wide range of diseases from skin and soft tissue infections (SSTI) to life-threatening systemic disease such as bacteremia and pneumonia with high mortality rates2,3.  Currently, methicillin-resistant S. aureus (MRSA) is killing as many people in the US as HIV. There is no vaccine for prevention of the various S. aureus diseases.

Based on the success of surface polysaccharide-based bacterial vaccines against Steptococcus pneumoniae, Hib B, and Neisseria meningitidis surface antigens of SA have been the prime targets of vaccine and immunotherapy development efforts. However, this approach has failed for S. aureus and recent findings which suggest whole cell vaccines or surface antigens can cause immunopathology and lead to increased lethality point to the need to refocus on secreted antigens which may be more protective 4,5, 6. Consistent with these findings, epidemiological data in humans indicate that low level of antibodies to SA toxins are associated with more severe disease, while no such data exists for surface antigens.

Collectively these findings point to a major challenge in vaccine and immunotherapeutic development for SA requiring a novel paradigm. In its long evolutionary journey, S. aureus has developed numerous virulence factors to manage its complex relationship with the host.  It produces a remarkably large number of toxins.  These toxins include over 20 superantigens, at least six cytolytic pore forming toxins, exfoliative toxins, beta toxin, and phenol soluble modulins (PSM). These toxins have a wide range of functions including immune evasion to destruction of tissues and biological barriers (Fig. 1). 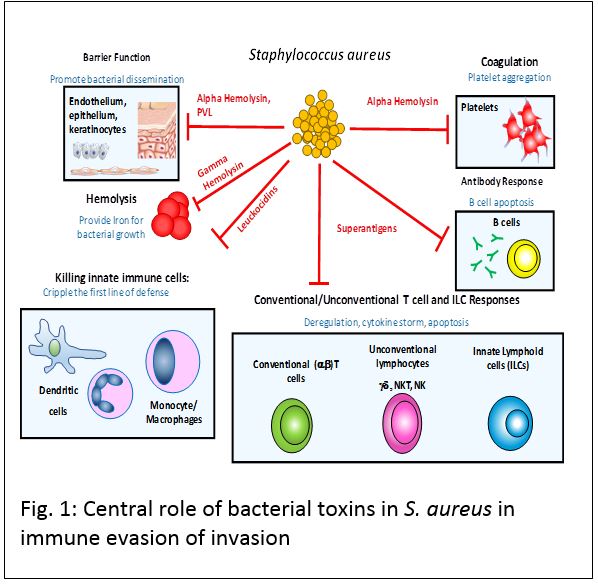 Challenges for development of toxin-based vaccines and immunotherapies

Too many toxins:  S. aureus produces more than 20 superantigens, at least six pore-forming toxins (alpha hemolysin, and bicomponent leukocidins), and toxins that target various components of complement system and other immunological functions. Cross reactive antibodies are needed to provide a broad neutralization profile.

Assays and reagents:  Studying these toxins requires production and characterization of numerous reagents and development of multiple assays.  Functional activity of staphylococcal toxins can be only determined in cell-based assays which require in-depth cell biology expertise and familiarity with the cell lines, primary cells, and their sensitivity to various toxins.

Animal models: The species specificity of most staphylococcal toxins creates a challenge when it comes to finding the the right choice of animal models can be challenging.  For example, mice are insensitive to PVL and LukAB but do respond to Hla, HlgAB, and LukED.  Rabbits are sensitive to all PFTs.  NHP cells are known to respond to all PFTs except for PVL and HlgCB7.  Superantigens cross link human MHC class II with the TCR.  Mouse MHC class II molecules bind SAgs with an affinity that is 1000 times lower than human MHC.  Thus, mice are insensitive to SAgs unless the toxicity is potentiated by endotoxin. Rabbits and NHPs, however, are highly sensitive to SAgs.

Solutions to challenges for development of toxin-based vaccines and immunotherapeutics

Highly pure and well characterized toxins including alpha hemolysin, and all the components of bicomponent leukocidins, as well as monoclonal and polyclonal antibodies for detection of these toxins are key tools for R&D effort to develop toxoid-based vaccines and immunotherapies.

Determining serum antibody binding and neutralizing titers against numerous SA toxins requires established and highly sensitive assays for detection and quantification of SA toxins in bacterial cultures as well as body fluids. In addition to the basic MIC/MBC for S. aureus, neutralization assays for Hla, PVL, HlgAB, HlgBC, LukED, LukAB, and a wide range of superantigens are needed to support the research development of appropriate vaccines and immunotherapeutics.

See links below to see related publication on this topic:

Back To Top
×Close search
Search

IBT Bioservices continues to conduct critical work as an essential business under the State of Maryland’s COVID-19 response directive. We have implemented a risk management plan and are continually monitoring the situation to ensure continuation of research according to public health services recommended best-practices for keeping our employees and the community safe.

The IBT Bioservices team will continue to deliver high quality products and services for every project. If you have any questions contact us at Services@IBTBioservices.com